Fantastic Beasts was the first telecast by Professor Noah Lott and it was a big success.  Ormond and Lethbridge Primary Schools involved a number of classes.  Schools received a large poster and students were engaged in positioning animal stickers into climate zone areas during the link-up.  A number of the Ecolinc beasts starred in the event including a bearded dragon, green tree frog and blue tongue lizard.   Some great responses from the schools following their time for a Think-Pair-Share.  Looking forward to Professor Noah Lott’s next event which is rumored to involved an exploding volcano. 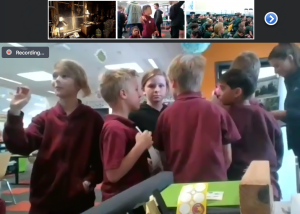